The transfer window for teams begins in the summer. This is because of the constraints on managers and players, as well as scheduling conflicts that make it harder to get games played during this period.

The “biggest transfers 2021” is a question that has been asked many times. The answer to the question is because the transfer window starts in January, and summer is when most of the big transfers happen. 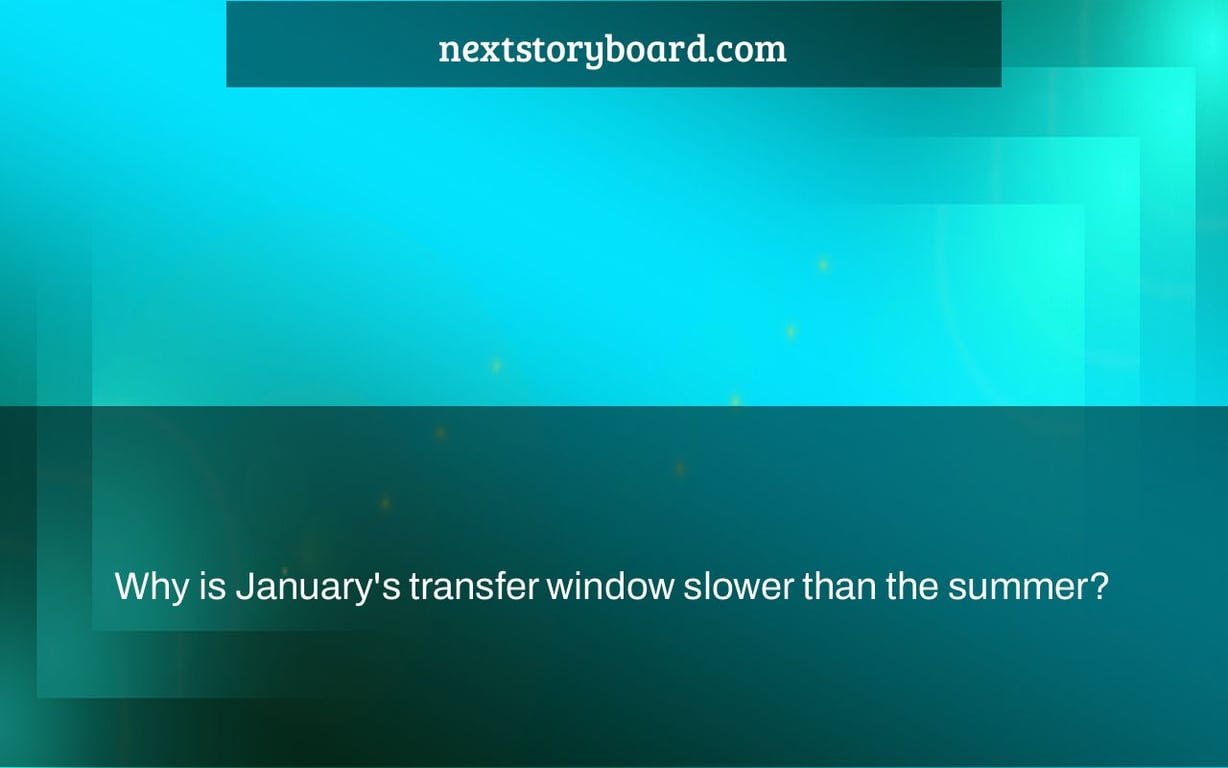 In Europe, the January transfer window is generally more slower than the summer window, with teams frequently opting to keep their current players until the conclusion of the season. But why is it the case?

Obviously, January is just one month, as opposed to three during the summer months of June, July, and August, but the data reveal a significant rise in expenditure during the offseason as compared to midway.

When we compare the most recent pre-pandemic window, 2018-19, to the previous two years, it’s evident that COVID-19 has had a significant influence on spending outside the Premier League. The most striking metric, though, is a league’s expenditure from January to July.

The ‘Big Five’ European leagues are broken down by Transfermarkt as follows:

The gap between the two periods may amount to more than €1 billion in player spending in extreme circumstances. Financial pressure is one factor, but there are other reasons why teams prefer to strengthen in the summer rather than January.

COVID-19 has had a significant financial impact.

After almost two years of the epidemic, football teams throughout the globe are still licking their wounds. Reduced revenue from gate revenues and a marginalized VIP market — not to mention sponsors, owners, and investors facing red numbers on their non-footballing activities — have taken an even greater toll on the football economy before COVID-19.

When football teams tighten their belts, the most apparent way to save money is to limit transfer expenditure, particularly because many are already fighting to maintain their present salary levels, much alone add to the payroll.

In the January transfer season, there have been less than 15 outright moves of €10 million or more, compared to roughly 50 in the pre-pandemic window at this time.

Last summer, when international travel restrictions between European nations were loosened, there was a surge in live scouting throughout the continent. In the scattered audiences of half-empty stadiums, scouts were more apparent than ever, most major league teams were present at the European Under-21 Championship, and a feeling of normalcy was being restored.

However, when new COVID-19 variations were available, which corresponded with the start of the European fall and winter seasons, travel decreased. As previously stated, the inability to watch a player live for an extended length of time has an influence on a club’s decision-making. Even if you have access to all of the film, data, and analytical tools in the world, the absence of real-world proof might stifle transfer activity.

To make things even more complicated, the delay of games during the holiday season has made late scouting checks on last-minute targets very difficult.

Keeping your top players is the next best thing to bringing in fresh blood in the midst of the season. The cynical hoarding of talent from the best teams, which many feared as a consequence of the pandemic crunch, has not occurred, maybe for the benefit of the game and competition (at least not to a greater extent than previously.) Even when it comes to players whose contracts expire in the summer, few teams are willing to accept a tiny midseason transfer price rather than nothing in five months if it means they won’t have to acquire a replacement.

With even mid-sized clubs fighting tooth and nail to keep their best players, the January transfer market is dominated by players who have struggled to gain playing time (and will need weeks to get back to full match fitness) or whose form has deteriorated — in which case it’s often better to avoid them and focus on the second half of the season with what you already have.

Tor-Kristian Karlsen is a former chief executive and sports director of AS Monaco and a Norwegian football scout and executive. He’ll be writing for ESPN on a regular basis on the business of soccer and the scouting process.

While the arrival of Roman Abramovich at Chelsea in 2003 and the Abu Dhabi-based ownership of Manchester City in 2008, among others, provided a volatile football economy with a boost at various points in the form of heavy, consistent spending — which eventually trickled down the ecosystem — the vast majority of newly arrived football investors are willing to build more gradually and sustainably.

Rather of pouring money into their club’s difficulties, the owners of the 2020s prefer to strive for several little victories rather than relying on a single multimillion-dollar acquisition to solve all of their problems.

Is the football club effectively run? Is it possible to make minor changes to eliminate bottlenecks and outmoded methods of operation? What about the club’s culture and environment? Is it a place where people come to learn and develop, or just to earn a living? Such issues should be addressed before embarking on a shopping frenzy.

With the recent influx of mostly North American investors into European football, there has been a greater emphasis on analytics, typically with cutting-edge methods of gauging the organization’s efficiency.

Clubs can discover answers in their own backyards.

Owners often question why they invest millions on an academy when few of the youngsters get an opportunity to play in the first team. This is a subject that is increasingly being addressed by a new generation of head coaches who are more interested in the art of teaching and nurturing potential than in bringing in a new superstar who could upset the dressing room harmony.

While the tough economic realities is the most apparent reason for lower expenditure in January, it’s also true that the steady appearance of coaches with a love for player development, tactical intricacies, and anything can be done to better an athlete’s day-to-day performance is having an influence. Rather than expecting the transfer market to be the only way out, the solution might already be playing in the U23s.

The “transfer season” is the time of year when clubs around the world will be looking to make big moves. This includes signing players and selling off their players. The summer transfer window is typically much busier than the January one, but there are a few reasons why this may be happening.