The gaming laptop is a compelling piece of technology for many reasons. It offers the power, style and durability that gamers need in an increasingly competitive market. But with all these benefits come high costs – up to $1,500 on average! Here’s 4 potential explanations why this price points exist.

Gaming laptops are expensive for a number of reasons. One reason is that they are typically used in the workplace and require more durability than a standard laptop. The other reason is that gaming laptops contain high-end components to ensure maximum performance. 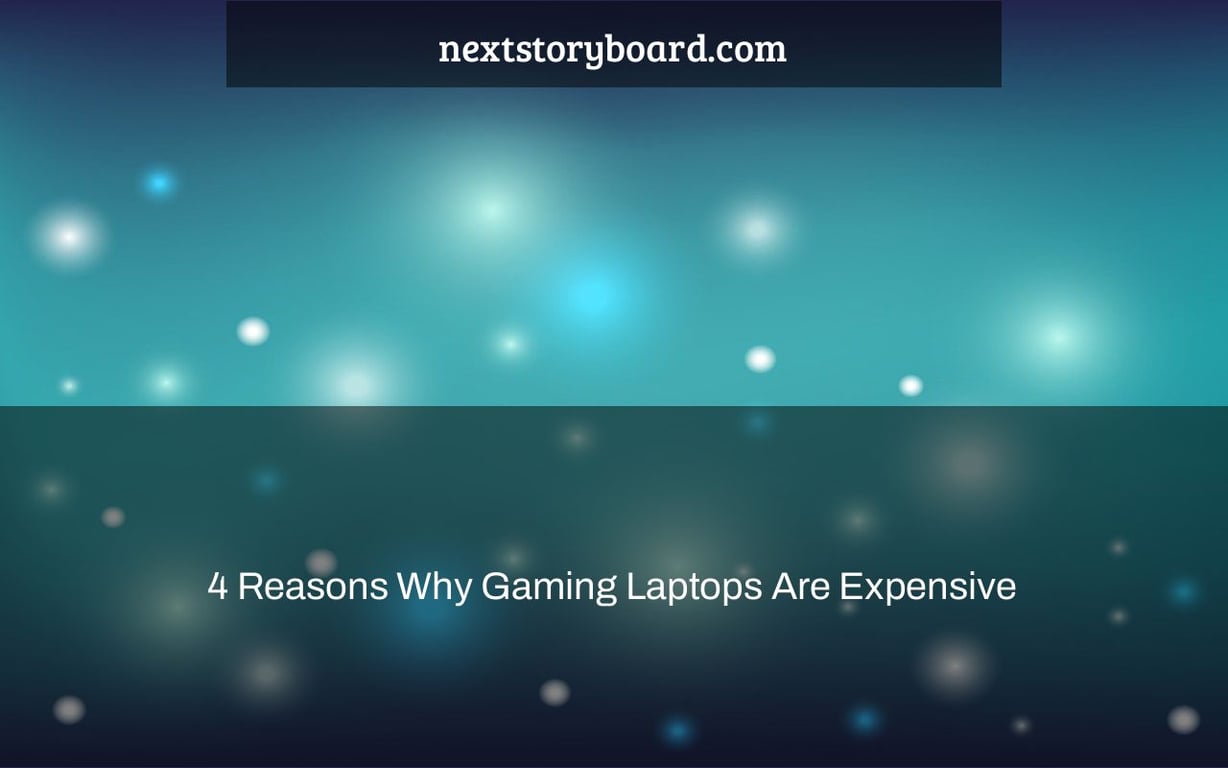 What’s the deal with gaming laptops being so pricey? Every gamer has asked himself this question.

If you ask this topic on a forum or about which gaming laptop to purchase, the most common response is to create a gaming desktop.

Consider a gaming desktop and a gaming laptop with identical specifications. You’ll also notice that the gaming laptop is more expensive than the desktop.

Despite the fact that the gaming laptop is less powerful.

Gaming laptops are portable and make gaming on the move a breeze. Is the price, however, justified? What’s the deal with gaming laptops being so pricey? Here are four reasons why.

The 4 Reasons Why Gaming Laptops Cost So Much

There are no standard laptop parts.

One of the reasons gaming desktops are less expensive than gaming laptops with similar hardware is because of this.

Parts for desktop computers are almost identical and interchangeable, and there is a market for it. You may connect a graphics card from one computer onto another. Laptops are not compatible with this method.

Gaming laptops aren’t as common as gaming PCs. As a result, manufacturers have no motive to provide standardized laptop components.

Aside from that, each laptop has a unique chassis. As a result, companies like Dell, ASUS, and Acer create bespoke components for their laptops.

A Dell laptop motherboard will not fit into an Acer laptop chassis. This distinguishes the laptop in its own right.

The ability to personalize allows businesses to demand higher prices. Because customizing components will be more expensive than just manufacturing them and installing them into every laptop.

Furthermore, a customized product will always be more expensive than a conventional product.

This leads to the next point: branding. The bulk of laptop manufacturers are well-known names.

They have shown to a large number of consumers that they are capable of providing the greatest customer service, customer support, quality goods, and quality control, among other things.

Razer Blade laptops have a reputation for being pricey.

As a result, they may charge a little more than normal. Take Razer, for example; they are a well-known laptop manufacturer, and their computers are more expensive than other laptops with comparable specifications.

It’s because they’re recognized for producing high-quality computers, allowing them to charge more.

Another example is SAGER, who are somewhat unknown and are working to establish their brand. As a result, a SAGER laptop will be less expensive than a Dell or MSI laptop with similar specifications.

Because each laptop component, such as the chassis and motherboards, is produced to order. The thermal solution will be different for each of them.

The size, shape, number of heats, and location of the cooling system are all influenced by the laptop’s chassis.

An empty area isn’t as bothersome as it is on a desktop. Empty gaps on a laptop are wasted space.

As a result, producers must make the most of every available area. With each passing year, gaming laptops get slimmer and thinner.

As a result, computers take up less space. And with less space, the laptop is more likely to overheat, experience thermal throttling, and catch fire (Yes, literally).

A laptop’s hardware is also less powerful than a desktop’s due to the danger of overheating.

As a result, manufacturers are forced to come up with novel methods to design cooling systems that can fit inside a tiny chassis.

Manufacturers will undoubtedly pay a premium for this invention. And the laptop’s price will rise as a result of this additional expense.

The new Acer Predator Helios 500 is an excellent example of a fantastic cooling system. It’s light and airy, with plenty of vents for heat to escape.

You may also lower the keyboard, revealing the fans. This significantly increases ventilation and reduces the risk of overheating.

Because every laptop is unique in its own way. The Manufacturing Methodologies is going to be different. From making the parts to assembling the parts.

Machines and humans work together to put things together. Laptop costs will undoubtedly rise as a result of this.

The laptops are subjected to quality check once they have been assembled. This is where the fault inspections are carried out. They are released into the wild or sold after passing quality control.

The The Mothership of ASUS ROG is the epitome of engineering and how costly production can be.

The Mothership of ASUS ROG

ASUS adopted a unique strategy to creating this desktop replacement laptop due to its formidable technology.

Just watch this video and you will understand why the The Mothership of ASUS ROG is expensive.

Why Are Gaming Laptops Expensive in Comparison to Gaming PCs?

Gaming laptops are more costly than desktops for the reasons stated above. One of the main reasons is the absence of standardized components.

It’s incredibly simple to locate and get components for your desktop computer. Parts for laptops, on the other hand, are not interchangeable due to differences in form, size, and other factors.

Gaming laptops, on the other hand, enable you to take the power of a gaming desktop with you. As a result, you’ll be able to play games on the move. Anywhere, at any time, and in any location.

Desktop computers are not portable.

The expense of gaming laptops was justified in part because of this advantage. Furthermore, gaming laptops are becoming smaller and lighter, and their cooling systems are improving. As a result, it will only grow in popularity.

You May Also Enjoy

Why are gaming laptops so expensive?

A: Gaming laptops are expensive because they have a lot of features. They often come with large screens, powerful processors, and other high-end components that make them more expensive than laptops which do not include these features.

Why are gaming computers so much more expensive?

A: In addition to the cost of building a computer, there are also many other factors involved with the manufacturing process. The components selected for a gaming PC vary based on such things as performance and cooling requirements. These differences in select components can add up quickly when you consider all possible cases.

A: Gaming laptops are expensive, yes. But this is due to their high-performance and the need for them as a tool in todays gaming industry. You can purchase cheaper alternatives if youre not looking for top quality performance or an extreme level of graphics power, but these will be far less powerful than any laptop made by a big name brand like Alienware or Razer.

What Chauncey Billups ‘loved’ despite loss to Trae Young, Hawks