Roblox is a popular platform for creating virtual worlds that have become increasingly sophisticated. The customizable nature of Roblox keeps the community young and growing, making it one of the most enduring games around. This list will offer an introduction to some of our favorite top 10 Roblox titles in terms of playability and entertainment value! 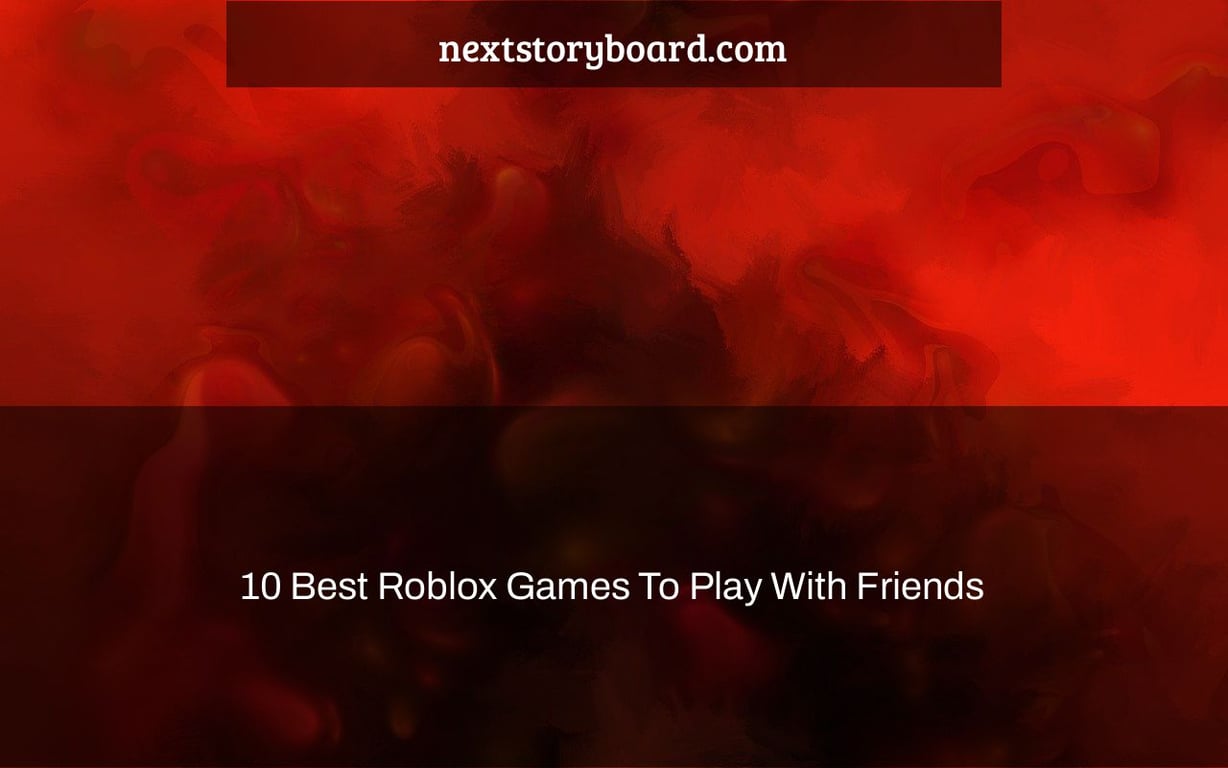 Gaming has become an important element of life in the aftermath of the epidemic. Even before the lockdown, the gaming industry was thriving, providing opportunities for social interaction, competitiveness, and cerebral stimulation. While we were locked at home, however, gaming not only kept our thoughts busy, but it also reinforced our bonds and provided us a sense of belonging.

Given the effect of pandemics and months of seclusion, the spike in average gaming time is unsurprising. Roblox is one such platform that saw explosive growth throughout the epidemic. The company didn’t get much momentum at first. Roblox’s popularity, on the other hand, has skyrocketed in recent years.

What exactly is Roblox?

Roblox is a free-to-play online gaming platform that enables players to develop their own game material while still enjoying the virtual experience. It was created in 2006. Roblox focuses mostly on user-created games, which is why it attracts millions of gamers every day. Roblox is a cross-platform game that can be played on mobile devices and the Xbox One.

Roblox games has 42.1 million daily active players as of the first quarter of 2021. Even after the COVID-19 limitations orders were removed in many areas of the globe, the number seems to remain unchanged. User engagement is soaring, with 202 million monthly active users, 40 million games, and 9.5 million developers on the platform as of April 2021.

Teenagers and children are the primary users of Roblox. According to the report, 67 percent of Roblox users are under the age of 16. The fact that all of Roblox’s games are created by its players sets it apart from other gaming platforms. Roblox isn’t only for playing games; it’s also for creating them. Roblox games are not explicitly developed by the corporation; rather, they are produced by the players.

Roblox’s Top 10 Games to Play With Your Friends

Roblox games are highly popular, and they’re a lot of fun to play with your pals. The platform’s range of games makes it even easier to keep the entire party entertained. Roblox is the appropriate spot for you to shoot things, create, mine, or play a complicated role-playing game, no matter what you want to do.

Roblox provides a number of incredibly popular free games accessible to everyone in its virtual world. The game has a big user base of people of all ages, with up to half of them playing with their friends. Users from over 200 nations utilize the site, where they spend endless hours developing and playing online games.

Choosing a game to play from the platform’s over 40 million games might be tricky. You’re in luck, however! This list of the greatest Roblox games has been compiled to help you make the most of your leisure time.

One of the most popular Roblox games of all time is Adopt Me!, a pet simulation game about nurturing and caring for your pet. As of November 2021, the game has had over 25.9 billion visitors, according to statistics. As of January 2021, this multiplayer game has a staggering 500K+ concurrent players, making it a record breaker. This custom game has a large fanbase and is updated on a regular basis, so you can anticipate Halloween-themed additions every year.

Working together with your pals, your objective will be to take care of the community, earning pets and improvements for your houses. You may be wondering how enjoyment could exist without a healthy dose of strong rivalry. The most exciting part of Adopt Me is when players open eggs to see who can get the rarest pet. You and your buddies may pursue a variety of valuable creatures, ranging from cat and dog companions to phoenixes and dragons.

One of the most popular games with a murder theme is Murder Mystery 2. This game, which was released in 2014, is one of those fan-favorite games that almost everyone has played at some time. With the rise in popularity of social deduction games like Among Us, Roblox’s most popular game, Murder Mystery 2, has remained one of its most popular. There are a few paid add-ons, and the game is played in brief rounds.

3. Getting out of jail

Jailbreak is another fantastic Roblox multiplayer game that you may play with your pals. It’s not only fun, but it’s also one of the most complicated Roblox games accessible. Users may choose whether they wish to be a policeman or a criminal in the Roblox game. When you take on the role of a criminal, your main goal is to get out of jail. On the other hand, you have the option of becoming a police officer and preventing your crooks from completing their objective.

It’s a lot of fun to play this game. What could be more thrilling than a group of buddies planning a heist or working together to thwart criminals? Thanks to its frequent updates, enhancements, and even seasons when you may collect item drops and battle for the top leaderboard, the game mod has been viewed over five billion times.

Brookhaven RP is an incredibly popular game on Roblox right now, as seen by the large amount of visitors in just 1.5+ years. Brookhaven is a role-playing game that focuses on luxury lifestyle and escapability. The players begin their journey in this huge metropolis and must navigate their way through it while trying to blend in. Simply join Brookhaven’s server with a group of buddies and you’ll be one of the cool kids in no time.

The city is kid-friendly, and everything within is well-protected in order to create a safe and welcoming atmosphere. This is the ideal game to play with your buddies if you want to build Roblox tales. While playing Brookhaven RP, you may also construct stunning homes and drive exotic automobiles.

Royale High is one of those Roblox games that always has a large number of people online. The game is a fantasy role-playing game, despite the fact that it is classified as an adventure game on the gaming platform. Royal High receives periodic upgrades depending on the seasons of the year and significant events, so there’s always something fresh to look forward to.

Players must dress up, role-play, and communicate with other players in order to level up and earn additional diamonds to purchase new stuff. The game includes a teleportation staff for navigating the game as well as a phone for communicating with pals and keeping track of time. Diamonds are the primary in-game money in Royal High, and they may be earned or bought using Robux.

Fans of cookery games will undoubtedly like this game. Work at a Pizza Place, one of Roblox’s earliest games, is a role-playing game in which participants are given control of a pizza parlor. You and your pals will want to live in this virtual world since the game is so much fun.

This game enables you to work as a chef, cashier, and other professions at a pizza business. It contains lessons on how to carry out each of these tasks. With the games’ excellent driving mechanics, these simulation games are a lot of fun when it comes to delivering pizza. This is one of Roblox’s greatest simulation games, with a ton of stuff to explore.

Arsenal is the place to go in Roblox if you’re looking for some fast-paced combat games. It’s no surprise that firearms make games more enjoyable, and Arsenal is the ideal game to play with your pals. This shooting game will show you who is the best at pulling the trigger.

Arsenal is based on popular games such as Counter-Strike and Call of Duty to provide you with a fantastic battle experience with your buddies. It’s an arms race game in which two or four teams battle for possession of the golden gun. To win, use the golden rifle to shoot an opposing player, then take the golden knife and backstab an adversary.

What’s the greatest part? It is absolutely safe for children since it does not include any violent elements.

8. The Tower of Doom

Tower of Hell is a fantastic adventure game with unique user-generated 3D adventures. This is Roblox’s most basic but effective game mode, in which you wobble your way through a randomly constructed tower with no checkpoints.

In some aspects, Natural Disaster Survival is similar to Player Unknown’s Battlegrounds. In this Roblox game, you will not be fighting other players; instead, you will be attempting to avoid various natural disasters that are meant to kill you. The game emphasizes the importance of working together.

The player must survive 12 separate calamities on 21 different pre-set maps on an elevated green island that is utilized for each round. Despite the fact that it was first released in 2008, the game is still one of the most popular among users. This game is entertaining and surprising, requiring players to estimate who they will encounter next.

This game is based on the Sims and belongs to the “Town & City” genre. Welcome to Bloxburg is a Roblox spinoff game that has lately acquired popularity. In this construction simulation game, players must construct and design residences.

Since its beta release in 2016, it has had over five billion views and over ten million faves while only being offered as a paid access game for 25 Robux. It became the eighth game overall to exceed one billion visitors on June 11, 2019, and the first paid game to do so.

Is Roblox suitable for children?

Roblox has been given the E10+ rating by the ESRB. This implies that the majority of children should be able to play Roblox. Nonetheless, the grade includes a note warning that players may share games with one another, connect with others, and be exposed to all material since there are many unsuitable roblox games that are not suitable for children.

Roblox constantly checks material posted on the platform, but with 70 million monthly active users, some inflammatory messages and other user-generated information may go through the gaps. As a result, it is critical for parents to get acquainted with Roblox’s complete parental settings in order to protect their children from improper material or messages.

That concludes our list of the ten finest Roblox games available right now. Furthermore, there are hundreds of unique user-generated experiences to enjoy on the site, so make the most of them. Theme Park Tycoon 2, MeepCity, Scuba Diving at Quill Lake, Super bomb survival, Squid Game, Vehicle Simulator, and Tower Defense Simulator are some additional prominent Roblox games.

The “best roblox games 2021 mobile” is a list of the 10 best Roblox games to play with friends. The list is separated into categories such as “Best Multiplayer Games”, “Most Addictive Games”, and “Best Competitive Games”.

What are the top 10 fun games on Roblox?

A: The top ten fun games on Roblox are tagged with fun in the title, so you can find more than just top 10 by typing in this search word.

What are the best 2 player games on Roblox?

A: These would be the games that are best for 2 players.

A: This question is too broad to answer.